April 2018 will be only the second time that Wales has entered a women’s team into the European Volleyball Championships, since the formation of Volleyball Wales in 2009.  The U19 Women will be competing in Liechtenstein from the 29th April – 1st May in the Small Countries Division.

The team will be travelling to Liechtenstein, a small country in the Alps, to compete against Luxembourg, Faeroe Islands, Scotland and the host Liechtenstein.

Volleyball in Wales is a minority sport and the governing body is unfunded. The players, coaches and staff all have to fund the trip themselves and training opportunities have been limited due to costs. 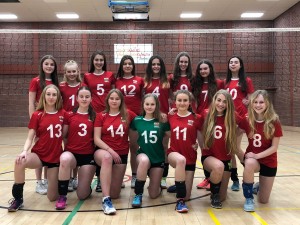 The team is made up of players from three South Wales Clubs; Cardiff Celts Volleyball Club, Swansea 360 and Team South Wales who have been preparing for this event since December 2017. The preparations consisted of training sessions as well as competing as Bishop of Llandaff High School in the English U18 and U16 Junior competitions to allow the team to gain crucial match experience. Additionally, all players regularly competed in their respective clubs in the National Welsh and English Leagues.

“It’s been a tough, but exciting journey preparing for the tournament and trying to fit in school work, training, league matches, and other activities has not always been easy. Competing in an international competition will be an unbeatable experience that will sure bring many memories that will last a lifetime”, says Rachel Daniels, captain of the women’s U19 team.

The players have never competed at this level before and are regarded as the underdogs in this competition. Nevertheless, the team is exited to compete at this level and are prepared to fight for every point. “The hard work that has been put in to this competition has been immense both on and off the court.  It has been such a learning curve for all involved, at every level, but I think that we are ready and we are certainly looking forward to arriving at the competition and having the chance to play some Volleyball” Sandra Stoll, Head Coach, says.