As 2015/16 league comes to an end, we are pleased to announce the league winners for both the men’s and the ladies divisions. 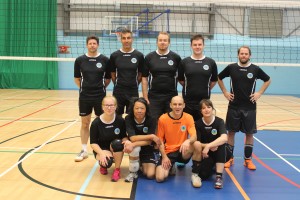 Congratulations to Brecon VC who won the inaugural Men’s league for 2015/16, losing only one match against newcomers Swansea 360.  The league saw a battle between 5 teams playing each other twice over the season.  Runners up were Cardiff Uni winning 5 of their games and losing just 3.  The level of competition improved hugely over the season and the league looks set to continue to develop over the next year.  If you would like to consider entering a team into next year’s Welsh League then keep en eye open for the application information which will be available in the summer.

This was the 2nd year that the women had a league in Wales, and it is with pleasure to announce that Cardiff Uni Ladies team were undefeated throughout the whole of the season.  Whilst this is a great feat in itself, it is compounded by the fact that this is the second year in a row that the girls have been able to achieve this.  Well done to all involved.  Runners up where TSW, who pipped Swansea 360 ladies to the spot on set difference.    Once again, the teams all showed an improvement over the season and newcomers Cardiff Jets and Cardiff Celts did well to settle into the league this year.  If there are any teams who would like to try and beat the undefeated reign of Cardiff Uni, then contact Yvonne Perkins for details about how to apply for next year.

Teams will be contacted shortly to gather some feedback from the league in terms of the structure and we will use that information to further develop the league for next year.  Looking forward to seeing you all in 2016/17.