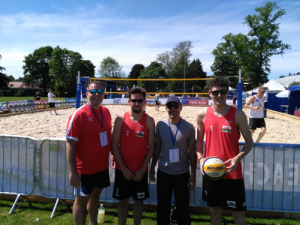 Perth, Scotland and Beach Volleyball might not go hand in hand when you think of the most played sport in the world but last weekend, 6 nations from across Europe headed to sunny Scotland for the first ever CEV Small Countries Division event to be held north of the border, and they didn’t disappoint.

Welsh pairing Billy Ewings and Nick Gray made their debut on the international beach stage under the tutelage of Michael Constantinou, at this 3 Day event which had attracted players from Luxembourg, San Marino, Ireland, Norther Ireland and of course, Scotland.

12 teams in both the men’s and women’s events competed in pool play before progressing to a single elimination competition to find the top pair.

Wales, seeded 10th, faced a tough pool with the number 1 seeds McHardy/MacLoed(Scotland) not only in their pool but the first game the pair would play. They would then have to battle 2 more experienced pairs from Ireland and Northern Ireland.

The scene could not have been any better, beautiful weather as the sun shone with just a slight wind blowing across the courts.  The courts were placed in the middle of the Scottish Open volleyball tournament adding a further 1000 players and spectators around the courts to cheer the teams along throughout the weekend.

Scottish Volleyball did a great job hosting this event and through innovative use of social media, it allowed more people from around the world to watch the games as they were streamed live. 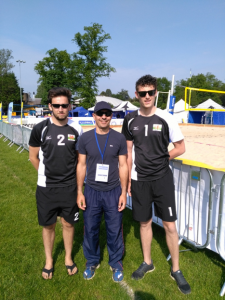 First up for our Welsh debutants were McHardy and MacLoed from Scotland, McHardy on the back of a successful season for IBB London Polonia where he picked up both the Super 8 title and Cup final success in the Volleyball England Leagues.  The Welsh boys were not fazed by this, after pre game chats and tactics with coach Mike, the boys set about on court 2 in this best of 3 sets match.  With great support from the other countries the Welsh boys fought hard and made Scotland work for every point going down 2:0, high praise came from around the courts as Billy and Nick showcased their skills and played some delightful volleyball.

Next up was the Irish pair McArdle and O’regan, the Irish duo had lost to NI earlier in the day so want to get off to a strong start which they did hitting some great pressure serves to the left hand side of the court.  McArdle swinging strongly, the took the first set with ease and then the second followed in succession for the Irish duo for their first victory of the weekend and 2nd defeat for the Welsh pair. Heads were still high as we moved to the second day knowing they still had the chance to reach the quarter finals as a minimum through the single elimination process later in the day.

Wales then faced the familiar faces of Workman and McKnight from Northern Ireland, the Welsh team knew these guys from their time representting Wales in the UK School Games in previous years and knew they had a hard battle on their hands. Saturday morning came and with friends and family watching online and getting messages sent via what’s app from Team Manager Mark Perkins, they went into action, this game was a tactical battle with cut shots and line overs the call of the day for both teams. Both Gray and Workman were on defensive duties for their teams and were asked to work hard by the opposition and Ewings started to command the net forcing the Northern Irish team to call upon all of their experience to take the match 2:0 .  The Welsh pair were only a few points away in each set and it was a game played in the best of spirits. 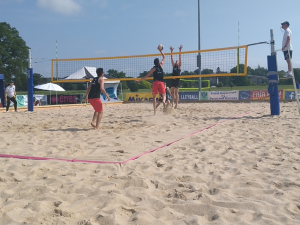 th place in the pool stages meant that Wales would meet the 3rd place team from pool b which was another Scottish team on the Saturday afternoon. The stage was set, they would play on centre court with a grandstand filling up of supporters and another match streamed around the world via Facebook live. Brown and Strachan stood in the way of a quarter final match on the Sunday morning.

Wales support was growing match by match not only in Scotland but in Cardiff at Victoria Park where Cardiff Beach volleyball club has recently been formed by Coach Mike and Carl Harwood and where Billy and Nick have been training, was showing the Welsh matches live on the big screen in the club house. The game got under way and Wales pressurized the Scottish pair right from the start and while they were targeting Gray on the serve, Ewings with great insight to play a few 2nd ball overs to the gaps left on court by Strachan as he made his way to the net to block and the tactics set out played off as Wales won the first set comfortably 21-12. The second set started strongly for the Scottish pair as Ewings and Gray made a few hitting errors which allowed the the local lads chance to extend their lead and eventually take the 2nd set and take this game to a tie break set.

So the scene was set, a race to 15 for a quarter final place and it was point for point all the way through the set, Brown covering the court well back court picking up some delightful cut shots by Gray.  Ewings getting into his swing with some powerful spikes but that wasn’t enough to stop Scotland getting to 14.12 and with 2 match points against them the Welsh boys summoned up the dragon inside of them to save those 2 points with some wonderful touches and great communication the score was now 16.15 to Wales – they had saved the match points against them and Ewings was on the service line ball in hand.  Wind behind him serving for the match, the crowd encouraged on by the event host were clapping loudly as Ewings stepped up, right hand side of the court he took 2 steps tossed the ball up and it was his favored float serve which was low and flat clipping the tape of the net and dropping over on the Scottish side for an ace serve and the match for Wales 2.1 The first victory in a European competition, the pair were elated and righty so as they were through to the quarter finals of this event.

Ewings and Gray rested in the hot tub which as acting like an ice bath aiding recovery for their legs as they focused on the next day and their match against the top pairing so far in this competition Cook and Miedzybrodski from Scotland, the most most experienced duo at the weekends event with British titles to their name and European experience a plenty.

Sunday morning fast came around and even Cardiff Beach Volleyball club had opened their doors early to screen the game on the big screen and the Welsh beach players made their way on to sand for match. Billy and Nick faced their toughest match and the match went the way of the tournament favorites 2:0 with Seain and Robin stepping up their game against the Welsh pairing. Billy and Nick went out swinging hard and fighting every last point, Seain and Robin would eventually go and win the Gold medal against McHardy and MacLoed so the Welsh boys played against the gold and silver medalist in their first event and high praise was offered from not only the other players for their performances but also the international coaches spoke highly about the pairs performance.

Michael Constantinou Head Beach Coach of Wales said ” The setting was beautiful and we couldn’t have wished for better weather. I was very happy with the Welsh team’s appearance in their first ever international beach event.

I can see the sport growing and becoming more accessible with more urban beach volleyball being built like the set up at Victoria park in Cardiff. This Saturday saw our men’s team reaching a place in the final 8 best teams of the completion, which is more than we hoped for”.

Billy and Nick said “Thank you to everyone back home and over social media, the support has been amazing, we have loved the experience and to play the top teams that we have we can’t wait for the next competition”